Skip to primary content
Skip to secondary content
“I was on a ‘floating bomb’.” This is how my father described the ship on which he served during World War II. “Our ship hauled fuel for the fighter planes.”
During November we observe Veterans Day in the United States to honor armed service veterans.  For genealogists, researching military records can often turn up valuable clues not found in other documents.
In 2006, while preparing to sell my parents’ house after they had passed away, I found a small brown, unmarked notebook in one of my father’s closets. Out of curiosity I flipped through it, and to my surprise, discovered it was a diary of sorts—notes that my father kept during his service in the United States Navy during World War II. It really wasn’t a diary of personal revelations, but rather a log of the events from the time he entered the service (he was drafted two months after his high school graduation in 1943) until his final notation on August 14, 1945.
While my dad was not all that interested in genealogy, and knew very little about his ancestors, he was always willing to talk about his time serving in World War II.  He said when he was drafted he actually got to choose which branch of service, so he chose the Navy. Why? He said it was “so he wouldn’t have to sleep in a foxhole.”
My father was not much of a writer, so it was a pleasant surprise indeed to find this little gem. 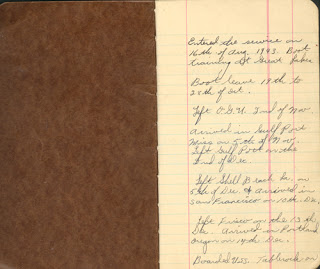 A couple of interesting entries included:
“Entered the service on 16th of August 1943. Boot training at Great Lakes”
“Boarded U.S.S. Tablerock on 15th of December”
“Dec. 25th – First Christmas away from home.”
“December 27 picked up invasion barges in Wilmington, CA.”
“Dec. 28 – Left Wilmington for Pearl Harbor at 5:00 p.m.”
“Dec. 29 – 1st verge of seasickness.
“June 11 – Arrived in Panama 10:00 p.m. Eleven hrs. to get thru locks.”
“June 12 – Met Whitey Petrisko” (his best friend from home who was in the Army).
And another very interesting entry in 1945:
“Ships position at time of surrender: August 14, 1945. Time 12:31 10º N by 164º W.”
While my father’s notes are a pretty cut and dry account of his military service, at least I have some written testimony of his experiences as part of “The Greatest Generation” and a piece of my father that I can always keep with me now that he is gone—something to give me greater insight into his life as a young man. 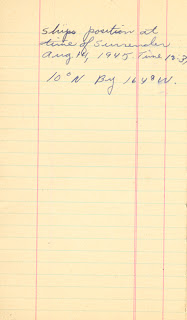 In addition to this journal/diary, I have a photo album with many snapshots of my father during his time in the U.S. Navy, as well as an address book listing the names of some of his fellow servicemen, my father’s induction notice, dog tags, and discharge papers.  These items have provided great details for telling the story of my father’s life.
If you are not able to find any documents or photographs related to your ancestor’s military service in home and family sources, there are plenty government resources you can consult, including:
Where to Find Military Records
In addition to home and family sources, you can locate military records for your ancestors using both free and pay-for-access sites and databases.  Subscription sites, Ancestry.comand Fold3 have a number of indexes and records online. The U.S. National Archives RecordsAdministration (NARA) holds Federal military service records in two repositories: National Archives Building in Washington, DC (Revolutionary War – 1912) and the National Military Personnel Records Center (NPRC) in St. Louis, Missouri (WWI – present).   Some additional records may be found at NARA regional archives reading rooms.  While a majority of NARA’s holdings are not online—there are two online collections you may find useful: The Archival Research Catalog (ARC) and Access to Archival Databases (AAD) System.  Other state and local libraries or repositories should also be checked.  For oral histories, check out the Veterans History Project at the Library of Congress.  In addition, check FamilySearch for digitized collections (e.g. United States, World War I Draft Registration Cards, 1917-1918; US. World War II Draft Registration Cards, 1942; Index to Naturalizations of World War I Soldiers, 1918; and United States, Applications for Headstones for Military Veterans, 1925-1941), and others you can explore from home (check also by state for special or unique collections).  Of course, there are also records still only available via FHL microfilm you can rent for a fee through your local FamilySearch Center.  Also, consult Joe Beine’s free site: Genealogy Research Guides – Military Records.
Since my father served in World War II, I am especially interested in resources for that time period and I find The World War II Research and Writing Center created by my friend and colleague, Jennifer Holik especially helpful. Jennifer is a World War II speaker, researcher, and author, and she recently finished a speaking tour in Europe. Be sure to check out her World War II Toolbox and her books, Stories from the World War II Battlefield: Reconstructing Army, Air Corps, and National Guard Service Records (Volume 1), Stories from the World War II Battlefield: Navigating Service Records for the Navy, Coast Guard, Marine Corps, and Merchant Marines (Volume 2), and Stories from the Battlefield: A Quick Guide to Researching World War II Records.
I’m grateful to my father and all veterans for their brave and dedicated service to our country.  Veterans Day is a great time to discover the heroes in your family tree, but thankfully, you don’t have to limit your research to the month of November—use the above resources to research military service records all year long!
[The above is a revised version of my blog post, “Finding Genealogical Clues in Military Mementos” written for the Legacy Family Tree Blog,  05 November 2013].