March 31 — Pick one female ancestor and write a mini-profile (500 words or less).

I decided to write a profile for my grandmother’s sister, Anna Fencsak Bavolar. 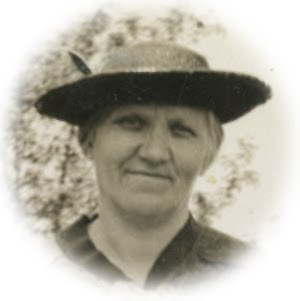 Anna Fencsak Bavolar was born on May 15, 1893 to Ilona and Mihaly Fencsak in Freeland, PA. She arrived in America in 1911, and was matched for marriage to George Bavolar by her sister, Mary Ceyba. Not long after the birth of her first daughter, Mary, Anna returned to Slovakia to care for her mother, who was ill and now re-married to Mihaly Zelenak. During that time Anna experienced conflict with her step-father who was a possessive person and did not want Anna there looking after her mother. Ilona died in 1917, but World War I delayed Anna’s return home until 1920. Anna and her husband eventually had four more children. Anna’s son George was killed trying to jump on a moving truck.

Anna died in 1959 from “myocardial infarction,” and “congestive heart failure.”

March 30 — Did you receive any advice or words of wisdom from your mother or another female ancestor? 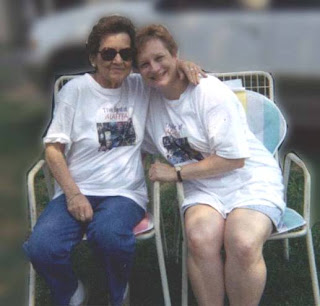 My mother taught me to believe in myself and that just because someone else had more money, more advantages, or more opportunities that I shouldn’t feel they were better than me, or that this made me less of a person. She also taught me not to give up just because something seemed difficult or impossible to accomplish. Mom was a very smart woman and while at the time I couldn’t understand the lessons or principles she was trying to teach, I can truly appreciate them now.

March 29 — Create a free Fold3 (formerly Footnote) Memorial Page or a Genealogy Trading Card at Big Huge Labs for a female ancestor. Some of you may have created your own card back in September 2009 following Sheri Fenley’s post over at The Educated Genealogist. This time, the card is for your ancestor. 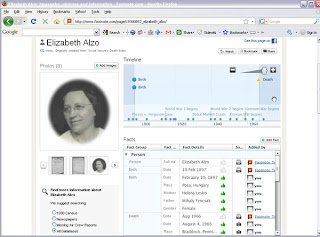 I chose to create a free Fold3 Page for Elizabeth Alzo (my grandmother). I used data from the Footnote database to help build the page – there are links to the 1930 census entry for her and to her naturalization petitions. I also added an image of her obituary, and plan to add some stories, and more information down the line.

March 28 — Do you remember your mother’s best friend? Your grandmother’s? How and where did they meet? How long were they friends? What activities did they share?

My mother’s best friend growing up was Dolores. I don’t want to infringe on her privacy so I won’t post her last name or a photograph or any more details. But I know that my mother was very close with her. While Dolores moved to another state, the two still kept in touch over the years with letters and Christmas cards. Many years ago, when I threw a surprise party for my parents 50th wedding anniversary, I invited Dolores and she came! My mother was so surprised–the two hugged and cried and spent the weekend sharing memories. I know it meant so much to my mom to have her best friend there. It was one of those extra special moments in time that you will always remember.

I’m not sure about my grandmothers. They were close to many of their neighbors and women they knew from church.

March 27 — Do you know the immigration story of one or more female ancestors? Do you have any passenger lists, passports, or other documentation? Interesting family stories?

The immigration story of my grandmother Verona was what prompted me to begin my genealogical research. She was the last of her siblings to immigrate to America, arriving at age 22 with her niece Mary, who was 16. 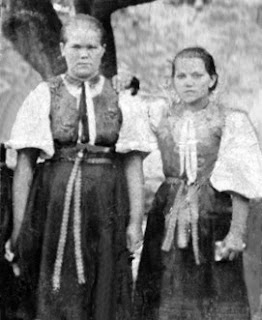 She was detained for several days at Ellis Island for medical reasons. I wrote about her experience in my March 19th “Fearless Females” post, “Have you discovered a surprising fact about one of your female ancestors? ” and posted an image of the ship’s manifest that documented she was detained.

[Note: Portions of this post originally ran during the Fearless Females series in March 2010]] 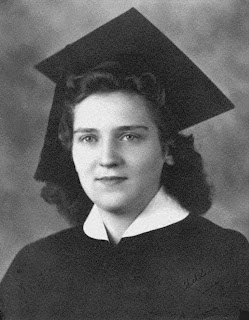 My grandmothers each had what was likely the equivalent of an 8th grade education, but by no means were they unintelligent women. They were at a disadvantage being immigrants and, but somehow they managed their households, raised their children, were able to hold down jobs speaking very little English.

March 25 — Tell how a female ancestor interacted with her children. Was she loving or supportive? A disciplinarian? A bit of both?

My mother was was loving and supportive, but also taught me to have respect for others, especially my elders. My mother was strict but I always knew she loved me and had my best interests at heart. Now that I am adult I can really appreciate my mother’s style of parenting. I also thank her for always believing in me and supporting my goals. She was my role model, especially with the way she cared for her own parents. I followed in her footsteps, caring for her and my father during their respective illnesses. My mother taught by example.

March 24 — Do you share any physical resemblance or personality trait with one of your female ancestors? Who? What is it?

I inherited fine hair and fine eyebrows from my paternal grandmother–this trait appears to run on her side of the family. Personality: I tend to take after my mother. She was a generous lady who always tried to see the good in others even if they were not always good to her. I also have inherited her “worry” gene.

March 23 — Create a timeline for a female ancestor using your favorite software program or an online timeline generator such as OurTimelines. 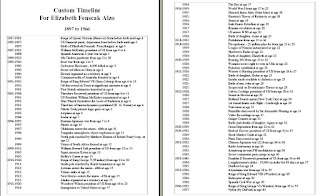 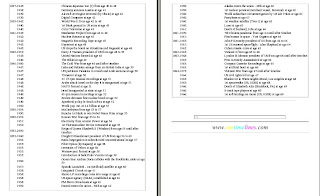 This is a timeline for Elizabeth Fencsak Alzo (using Our Timelines)

All Rights Reserved
http://theaccidentalgenealogist.blogspot.com/atom.xml
March 22 — If a famous director wanted to make a movie about one of your female ancestors who would it be? What actress would you cast in the role and why?

I could only hope for a chance to bring the life stories of my grandmother and mother (from my book, Three Slovak Women) to the big (or even small) screen. 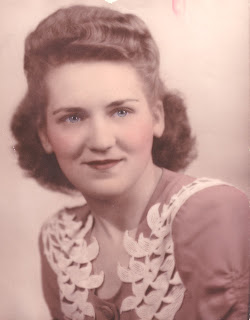 I never really thought about who would play my grandmother in the movie version, but I have thought many times that I would like to see my mother portrayed by Catherine Zeta Jones .
Copyright, 2012, LIsa A. Alzo
All Rights Reserved
http://theaccidentalgenealogist.blogspot.com/atom.xml