Skip to primary content
Skip to secondary content
This Father’s Day, in memory of my father, John Alzo, I reflect on ten things I learned from him. 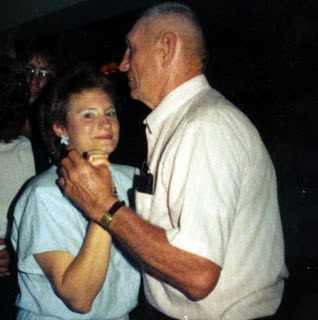 Lisa Alzo dancing with her father John in 1983

Ten Things I Learned from My Father

1. Stay loyal to your family. My father was the youngest of four. He had three older sisters (Ann, Betty, and Helen) who looked after him when he was a boy. But later in life, Dad would be there for his sisters to look after them during their respective illnesses. Certainly family has issues or problems, but my father always tried to stay “neutral”–he never wanted to be estranged from his sisters or be on bad terms with them. Dad appreciated and respected them.

2. Don’t be afraid of hard work. My father was a carpenter. He worked for the Union Railroad. When Dad retired in 1983, his boss gave him a handwritten letter that said: “I had to write you a note because I know of no way to let you know how much I think of you as a man, and a craftsman. This country was built by men like you who took pride in their work. I don’t know where we will find the men to replace them and you.” In addition to his job on the railroad, Dad performed his own version of “Extreme Makeovers” on a number of houses throughout his hometown of Duquesne, Pennsylvania and its surrounding areas. His talents were reflected in the countless roofs, paneling jobs, cabinets, decks, and more. Dad’s job on the railroad was not glamorous, but he took great pride in his work. Learning from Dad, I take pride in my own work–no matter the job.

3. Smile! My father had the most beautiful smiles and. He was generally a happy guy who loved to laugh and joke. Even in his times of suffering, he found a way to say something cute or funny to his doctors, nurses, and others around him and would give them that smile.

4. Actions Speak Louder Than Words. Dad wasn’t much for outwardly expressing his feelings by saying “I love you,” all the time, or by hugging and kissing. But it was by his actions that I knew he loved me. He was always there when I needed him. He was the guy you could always count on. I felt safe with Dad. Once in awhile, his softer side would show through his tough exterior, and he would wrap his strong arms around me and give me a hug. And, he would always tuck me in at night and give me a goodnight kiss when I was a little girl. He’d say, “Goodnight, Mrs. Calabash, wherever you are.” this was the signature sign off of comedian Jimmy Durante.

5. Be a Team Player. My father was a star basketball player in his day–throughout high school, and playing on several semi-professional teams until his late 40s.Whether it was on the basketball court, or in the game of life, Dad was always first and foremost a team player. Today, the idea of working for the good of the team often gets lost in the “me” generation and the “I want it now” society. Dad worked well with others. Perhaps it was partly because of his easygoing nature, or that he could adapt to any situations. He was actually the most unselfish person I have ever known. While others on his basketball teams may have wanted to hog the ball to take top scoring honors, Dad focused on making sure the team won. He was generous with his time and money and would help anyone in need without an ulterior motive or desire for anything in return. Dad was a true gentleman on and off the court.

6. It’s Not Presents or Material Things that Matter. My father was not a materialistic person, and was generally unaffected by the idea of holidays. Although he would make sure we had them, he never understood the obsession with presents, gifts, cards, etc. and always told us not to “waste our money” by buying such things for him. What he enjoyed most is just having me and those he loved around him.

7. Be a Good Friend. My father was a loyal and true friend. There were very few people in Duquesne that dad did not know either through basketball, the Slovak Club, the Union Grill, or the Railroad. Dad had such a warm personality that people were attracted to him instantly. But, his circle of core friends did not change very much over the years. Many of these friends were his former basketball teammates. You don’t find friendships like that anymore. It is a rare thing today to have the same friends in your 70s that you did in your teens and twenties. Dad was a lucky guy; he was a good friend and had good friends in return.

8. Look After Your Neighbors. My father was the “go-to” guy on our street. Whenever the next door neighbor needed a ride to the beauty parlor, the doctor’s office, or the grocery store, or church, my father would gladly volunteer. WIth his carpentry skills he also fixed many a roof, put in paneling, or did other odd jobs for anyone who asked–many times he would not accept any payment.

9. Give From the Heart. My father cared about his family and always tried to do right by others. He gave of himself without expectation of anything in return. Next to his big blue eyes, and beautiful smile, Dad’s generous heart was one of his most distinctive features. After Dad passed away, one of my cousins wrote to me: “If all the people in the world could have someone like him in their lives the world would be a much better place and there would be peace through out.”

10. Shoot Your Best Shot! Dad used basketball as a metaphor throughout his life. He met the challenges of life like he would a tough opponent on the court; with one simple phrase in mind: “When the chips are down, shoot your best shot.” As I face challenges in my own life, I try to think how my father would tackle a problem or address a situation and try to keep this phrase in mind.

So, on this Father’s Day I say “Thanks, Dad” for all you’ve taught me. I miss you more than you know!