March 17 — Social Butterfly? What social organizations or groups did your mother or grandmother belong to? Sewing circle, church group, fraternal benefit society or lodge? Describe her role in the group.

My mother and grandmothers socialized mostly with their neighbors or friends they knew from church. My mother belonged to the Ladies Penna. Slovak Catholic Union and the Roman Catholic Parochial Beneficial Society of Rosary of the Blessed Virgin. 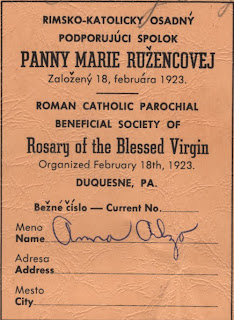 When our immigrant ancestors arrived in the New World, they often settled in enclaves within cities and towns and tended to cluster in specific regions in the United States. It was common for immigrants, particularly those who did not speak English, to travel together and put down roots among relatives, friends, or neighbors from their native land. These so-called “cluster communities” offered a place where the immigrants could transplant and preserve their culture, lifestyle and traditions as best they could in their new surroundings. Seeking to keep their culture as it existed in the homeland, immigrant groups frequently founded their own churches, schools, boarding houses, and other institutions, as well as forming their own academic, athletic, or charitable groups, and fraternal, occupational, and social organizations. Many also established their own ethnic presses that published newspapers and histories to highlight specific communities. In the late 1800s, fraternal organizations became very popular.

Employed largely in difficult and often dangerous industrial occupations, immigrants sought financial protection for themselves and their families. As a result, they established their own fraternal/benevolent organizations to provide mutual insurance and to foster camaraderie and social interaction, and some even as a way to keep ties to traditions or ways of the old country. Today, we have the Internet and social media. For my parents and grandparents, these fraternal benefit societies and lodges provided the “social networking” opportunities.