Skip to primary content
March 13 – Moment of Strength: Share a story where a female ancestor showed courage or strength in a difficult situation.
[Note: This post originally ran during the Fearless Females series in March 2010]
For this post, I am remembering my mother, Anna, and the grace and dignity she showed during the final years of her life. In 1997, my mother had triple bypass heart surgery, and simultaneously was diagnosed with renal failure, resulting in her having to endure a three-year regimen of kidney dialysis. During this time I served as her primary caregiver and watched her suffer through all of the side effects associated with the procedure. She showed tremendous courage and strength through it all. My mother passed away in 2000, but she fought until the very end. 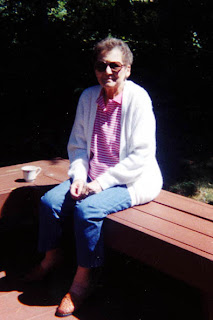 The above photo of my mother was taken on the deck in my backyard not long before she passed away. She loved to sit on the deck and feel the warm sunshine and listen to the birds (especially the cardinals–her favorite bird). There is not a day that goes by when I don’t think of my mother.
Copyright, 2013, Lisa A. Alzo
All Rights Reserved
http://theaccidentalgenealogist.blogspot.com/atom.xml