In October 1910, my grandfather Jan (John) Alyzso (Alzo), left his family and home in Kučín, Slovakia (then Hungary) for America. At 16, he may have traveled to a new life in a new world, but he never forgot about his parents or siblings.

I never knew my grandfather (he died 2-1/2 years before I was born). But through genealogy I learned a lot about him.  One of the things that struck me the most was his sense of duty and responsibility to those he cared about.   He was a “go-to” type of guy and just seemed to always be taking care of someone. Whether it was helping out his sister, Mary, who came to America after her husband died with her two-year-old daughter, doing odd jobs for his friends and neighbors (he was the neighborhood “handy man” and could fix just about anything), or arranging for the burial of his cousin who was murdered in Pittsburgh in 1916 (more on this story in another blog post), “Pap” was someone you could count on.

What does this have to do with my trip to Slovakia?  Quite a bit, actually.  About a month or so before the trip, my cousin Jack (who made the journey with me), found some old papers that he inherited from his mother.  One item was an International Money Order my grandfather sent in 1912 to his mother and father in Slovakia.  During my trip in 2010, I learned about the Alzo family homestead and how they acquired their land.  Not only had my great-grandfather (Janos) traveled to America several times to work and earn money to buy land,  I was told that my grandfather had sent money from America (from his salary he earned as a steelworker in Duquesne, Pennsylvania) to help with the purchase as well. (For those not familiar with Eastern European research–after centuries of serfdom/having to work for the nobility of the Austro-Hungarian Empire, being able to own one’s own farm/land was a BIG deal).

On the Sunday we visited Kučín, my cousin Jan (his father was Andrej–my grandfather’s youngest brother who was born after my grandfather left for America), showed us the fields where the Alzo families had worked and the land he currently farms.

We saw with our own eyes what my grandfather helped his family acquire.  My cousin, Jack (who was fortunate to actually know and spend time with my grandfather, and who is also my godfather) teared up several times.  I did too.  It was quite an emotional moment for the two of us. 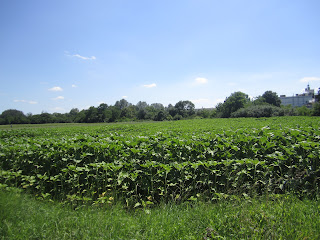 After our tour, it was time to head to the Alzo home for lunch.

3 thoughts on “Sojourn in Slovakia: The Sequel. Day 3: A Special Sunday: Part II”