My dad’s sister (my “Auntie”–who kept the scrapbook I wrote about in my March 8th post) was a Roman Catholic nun–she spent most of her adult life in a convent in Victoria, Texas. Our family always looked forward to her visits–usually at Christmas and for a few weeks in the summer. Here is a photograph of her once she took the name of Sr. M. Camilla. 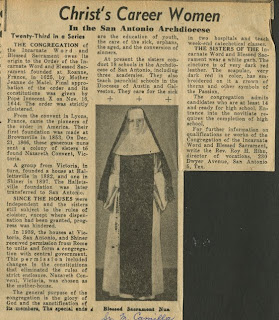