After the lovely afternoon luncheon, we next went in search of Fencsaks and Leskos–my paternal grandmother’s lines. Robert, Renata, and Helena (Helen) drove to Possa–another of my ancestral villages. 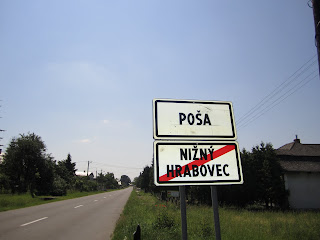 We stopped at several homes where Helen asked some of the people she knew if they remembered the Fencsak or Lesko families. We met a Mr. Nadzam (shown at left, below) who wanted to go with us on our little adventure. and took us to one of the houses where we might find someone to talk to about the families. Mr. Nadzam said that he never dreamed when he woke up that morning that he would have such a “special visitor'” all the way from America. He also said “Mountains don’t move, but people can.” 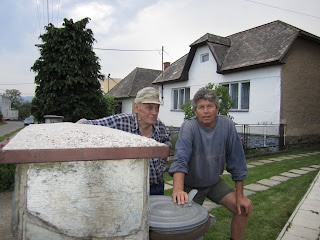 We were invited in to one home of a gentleman with connections to these families. He had some documents from the U.S. and let us take some photographs of them so that I could further trace the connection. It seems I found a potential distant cousin.
While there was no genealogy “slam dunk,” I at least took away a few more pieces to the family puzzle. Again, I wondered if I had made this trip too late? Would I have had more success finding family 15 years ago? Maybe…maybe not. I truly believe if you are willing to take risks in the search for your roots, eventually some of them will pay off. So, you have to keep on knocking on those doors.