Skip to primary content
One of the highlights of the trip was attending Roman Catholic mass in Sabinov at Farnosť mučeníckej smrti sv. Jána Krstiteľa (Roman Catholic Parish Martyrdom of St. John the Baptist) on the Sunday of our family gathering. A few of the family members were going in the evening and asked if I wanted to go along. Since none of the other folks spoke English, I was happy that Martin (who did) agreed to go and said I could ride in his car with him.
The church in Sabinov was lovely and the mass was fully attended – there wasn’t a seat available. We arrived early enough to find an empty pew. It was so amazing to hear the prayers recited and hymns sung in Slovak. There was no mistake that you were in church. I also noticed that the priest was very young. 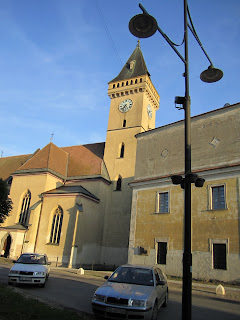 It reminded me of Christmas time in the church I attended while growing up–Holy Trinity–which was always known as the “Slovak” (or “hunky”) church. They used to sing carols in Slovak and some of the prayers were said in Slovak as well.
This was definitely a part of the trip I know my mother–who was a devout Catholic–would have cherished. I know she was smiling down on me that I took the time to attend mass in our ancestral homeland. 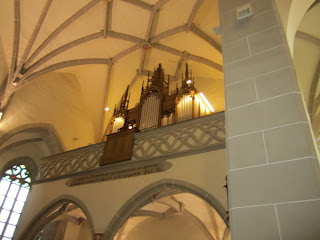 On the way home from Sabinov, Martin, told me we were going to have “another lunch”–a barbeque Pavel and family were preparing. More food!
to be continued…
All photos by Lisa A. Alzo
Copyright 2010, Lisa A. Alzo
All rights reserved
http://theaccidentalgenealogist.blogspot.com/atom.xml