Skip to primary content
Sorry for the brief interruption…I had a busy week with no opportunity to write.
As we were walking to the cemetery in Milpoš, the rain started to come down a bit harder, but it didn’t dampen my spirits or my hopes of finding out more about my Straka ancestors. Miro met us there and pointed to some of the graves–mostly in the newer section of the cemetery. It was a bit muddy (glad I had on good sneakers for walking and sloshing around but wished I had brought my boots!). The rain then slowed a bit as we started to look around. 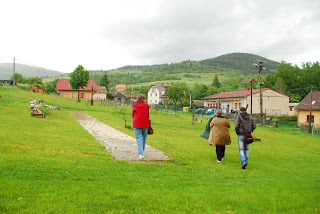 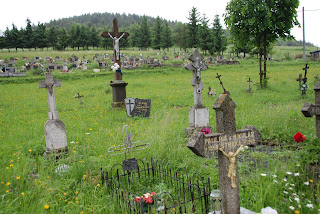 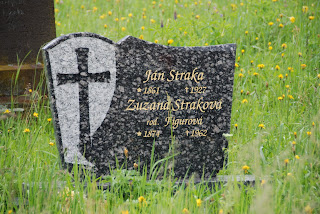 Miro also told me that he is working with several colleagues to chronicle the history of Milpoš in a book. I look forward to obtaining a copy. I was not able to go inside the church because the priest was not there that day. Also, I was told that the records for the village are located in another village–Ľutina (something I also knew already from researching microfilmed records at the Family History Library). Miro had to get back to work but gave us each an energy drink and bid us a fond farewell. 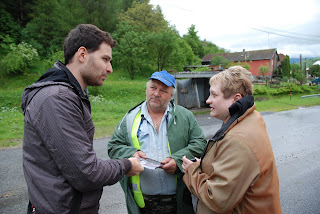 Next, we tried a few more houses to track down the remaining Straka descendants. It was still raining. We met a woman who had married into the Straka family. Luckily for us, her granddaughter was visiting from America to attend a family wedding and she was able to help with translation as I explained who my grandmother was, named her siblings, etc. 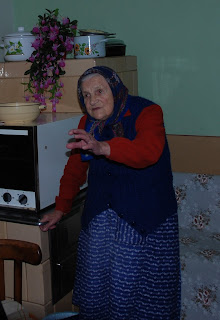 They had some photographs too (we took digital images of them) and I hope to be able to eventually sort out the connection. 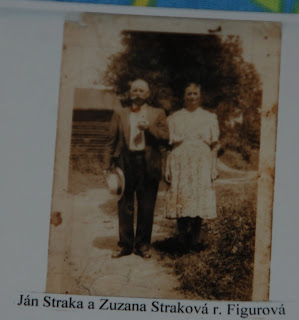 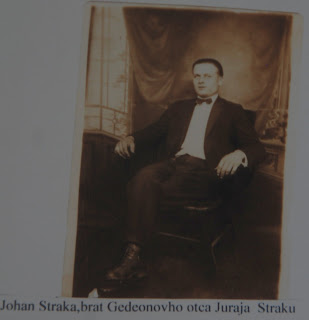 Next, we moved on to talk with the other Straka family. The man we spoke to said his grandfather was Stefan Straka who was a soldier in the army (my grandmother’s brother–Istvan (Stefan) had stayed in Slovakia and was a soldier). The man thought he recognized the picture I showed him of my grandmother’s brother although it was a bit hard for him to see it clearly on the book page. I took down his name and other information and he and his wife posed for a picture for us before we left. 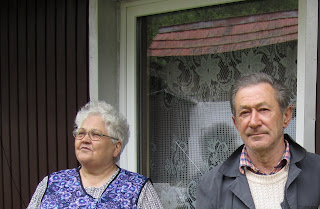 By this time, it was getting late in the day and time for us to be on our way. I was so grateful to my travel companions, Ginny and Andy for being there with me and to Stevo for all of his help knocking on doors and translating the conversations with everyone we met.
As I watched Milpoš disappear behind me I felt a variety of emotions. There was joy because I had finally made it to Grandma’s village, but a bit of sadness too that I did not get to meet anyone who knew my grandmother or her family. This was a bit disappointing, and as I thought about the situation I wondered had I made the trip 10 or 15 years ago would there have been a different outcome? Perhaps I would have made that tangible connection. But, I guess I will never know. It just drives home the point that you need to make these trips sooner rather than later before everyone who remembers your family passes away.
I tried to focus on the positive aspects of my visit and not dwell on what I didn’t find. I still had two more villages to visit during my stay and I knew I would be meeting family then, so I now turned my thoughts to my paternal ancestors.
to be continued…
All photos in this post by Andy Rabatin
Copyright 2010 Lisa A. Alzo
http://theaccidentalgenealogist.blogspot.com/atom.xml