Skip to primary content
For the longest time I imagined what it would be like to actually set foot in my grandmother’s village. I had seen pictures of and heard what Milpoš was like from others who had visited, so I though I had an idea of what to expect. It was something of what I had pictured in my mind, and so much more–to walk on the ground where your ancestors once walked is simply the most awesome feeling–something you must experience for yourself. 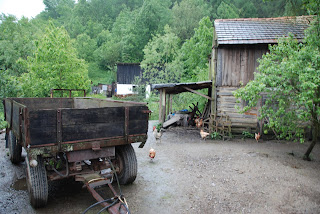 Photo by Andy Rabatin
During the many years I’ve been a genealogist I’ve also heard stories from fellow researchers about how they went to their ancestral villages, knocked on a few doors and instantly found family. So, I was anticipating this is what would happen to me in Milpoš. Unfortunately, it didn’t.
After taking the pictures of the village sign, we drove a bit further down the road until we spotted the Mayor’s (and village) office on the right hand side and a the first houses in the village on the left. 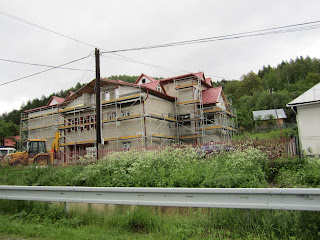 Photo by Lisa A. Alzo
We got out of the car and our guide, Stevo, spotted a woman in her yard (I’ll call her “Grandma A.” and asked her (in Slovak) about any Straka families who might still be living in the village. I also had him ask about the Verbovsky family. Since I had a copy of my book with me, I was able to show her pictures of my ancestors. She didn’t recognize them. Soon,
a few of the other babas (Grandmas) and neighbor ladies came out to see who we were so “Grandma A.” tried to explain. 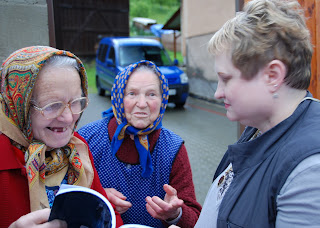 Photo by Andy Rabatin
We were directed to a few houses where Straka families still lived and told we should see the former mayor (Miro Straka) who had just come down the road driving a huge truck full of large rocks. Because of the heavy rain they were trying to take precautions against flooding. 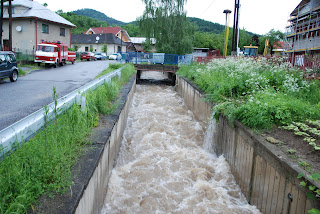 Photo by Andy Rabatin
Miro stopped for few minutes and I introduced myself (thanks to translation help from Stevo). I had corresponded with him a few years back by e-mail (with help from a software translation program). He remembered me and greeted me with a hug and two kisses on the cheek. Miro told us he would have a 30-minute break for lunch and would meet us at the cemetery.
We were told there was one home that used to belong to the Verbovsky’s but when we followed up later we were unable to connect with anyone in the home to confirm this. We decided to go in search of the Straka families and then to meet Miro at the cemetery. I was optimistic; still in search of my “Who Do You Think You Are? (WDYTYA)” moment.
to be continued…
Copyright 2010 Lisa A. Alzo
http://theaccidentalgenealogist.blogspot.com/atom.xml