March 4 — Do you have marriage records for your grandparents or great-grandparents?  Write a post about where they were married and when.  Any family stories about the wedding day?  Post a photo too if you have one.

I have marriage records for both sets of grandparents.  My father’s parents, John & Elizabeth (below) were married in Duquesne, (Allegheny County) PA in January 1915 in SS. Peter & Paul Byzantine Catholic Church.  He was 21 and she was 18.  I don’t have any stories but do have a photo (see below). 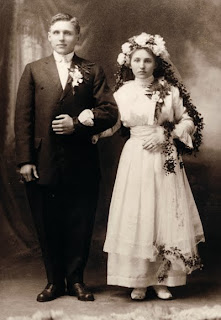 My mother’s parents, John & Veronica, were married on November 1,1924 in St. Nicholas Church in Barton, OH.  Their wedding and reception lasted for three days.  I wrote about their marriage in my book Three Slovak Women. 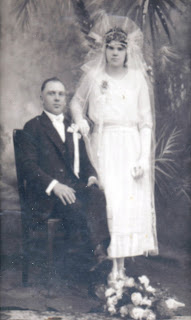