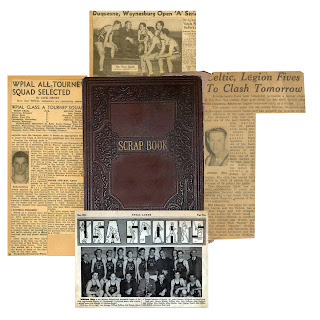 I gently lifted the brown scrapbook from its storage space in the corner closet of the basement of my parents’ home. Tiny pieces of brown paper left a trail on the floor as I carried the book upstairs to the kitchen table. I carefully turned the tattered pages, and one by one the headlines captured my attention, as if trying to tell me a story.

“Johnny Alzo, former Duquesne High School standout and one of the most promising players in the district, has been one of the main factors in the fast pace of the Dukes.”

“One of the all-time Best”

While growing up, I often listened to my father talk about his days “on the court” playing basketball, first for his high school team—the Duquesne Dukes, and then various independent basketball leagues (United Steelworkers, Duquesne American Legion, and others) and semi-professional teams throughout Western Pennsylvania, until he hung up his sneakers at the age of 37. What I did not know was that my father received numerous awards and press coverage for his prowess on the court. He was named to an “All Tourney” squad in High School, and given such monikers as “crack forward” and “fancy marksman,” by sportswriters for the Pittsburgh Press and other local newspapers.

My father was not one to brag about his accomplishments. He simply loved to play the game of basketball. Instead, Dad collected all of his memories in that old scrapbook and tucked it safely away in his closet and forgot about it—that is, until his daughter, the inquisitive genealogist, stumbled upon it. Despite its tattered appearance, the scrapbook is a precious repository of newspaper clippings, photographs and scorecards of 20 years of play and a chronicle of Johnny Alzo’s life.