Turn of the Century Pittsburgh Comes Alive in Speak American 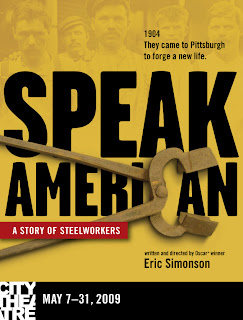 Speak American is set in 1904 Pittsburgh where a group of newly immigrated Slovak, Bulgarian, and Polish steelworkers are enrolled in an English class taught by a plucky beginner. Through the teacher’s dealings with the class and their boss, we are caught up in their indomitable will and dreams of a better life.

Eric Simonson is an American writer and director in theatre, film and opera. His film A Note of Triumph: The Golden Age of Norman Corwin won the 2005 Academy Award for short subject documentary.

Where: City Theatre, one block off Carson at Bingham and 13th Streets, South Side.

Students and age 25 and younger may reserve $17 tickets in advance or may purchase rush tickets for $10 cash or $17 with a credit card at the Box Office beginning two hours before showtime.