This is part three in a series of postings I haved dubbed, “Hidden Genealogical Gems,” – items belonging to family members that I discovered while cleaning out my parents’ house.

My mother’s autograph book showed up in a tin box that contained a few of her other personal effects. I found this little treasure to be both entertaining and informative – it provided a glimpse into my mother’s life during her teenage years and long before she was my mother. 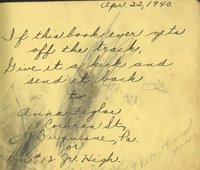 The inside page shows a date of April 22, 1940 and is in my mother’s handwriting. It also contains her signature, and address at the time. She was in Jr. High School. Mom always had such nice handwriting – wish I could say the same about mine. 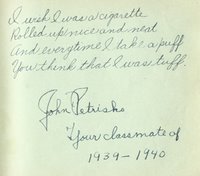 There were pages and pages of autographs from my mother’s friends and classmates. The above is a sample page from a fellow classmate, John Petrisko, who actually was my father’s best friend. My mother and father were in the same class at the same high school but did not date then–they only knew each other as fellow classmates. It wasn’t until many years later that they would meet again and begin dating, and eventually marry. Many of the entries in my mother’s authograph book contained common sayings or poems popular during that time.

I love finding these genealogical gems that help me to know my parents as young adults. It gives me a more well-rounded perspective of their life stories.