Last week I received an e-mail from a man who happened to be doing a Google search on his surname and was directed to my web site, and a recent article I wrote for Family Chronicle Magazine, entitled “20th Century Desperate Housewives (see my web site). 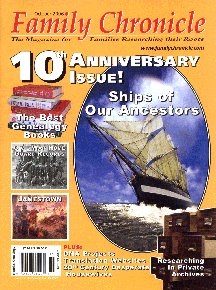 The article focused on the lives of six women in Duquesne, Pennsylvania in 1936, including the various secrets each kept and how the murder of one of them had in some way affected the others. One of the women shared the same surname (through marriage) as the person who e-mailed me (I won’t say which one to protect the gentleman’s privacy). He said that the research I did on the woman has inspired him to learn more about his paternal ancestors. To quote from his message: “This is quite exciting, as I always wondered about my heritage…”

I thoroughly enjoy researching my ancestors, and even more so, writing about them. Messages such as these make me want to keep doing genealogy. It is nice to know that my research has inspired another potential genealogist to research his family, and it is even more inspiring since the person is part of my extended family!